The Cupcake Kids are crazy for orphans

Introducing the Cupcake Kids. Little People with big CRAZY hearts for God and the imprisoned children of Africa. They may look small, but these little people represent the fundraising arm of Sixty Feet.  My Visiting Orphans mission team of 32 will be ministering with Sixty Feet at Prison “M” and “M2”.  We will have the incredible opportunity to see with our own eyes the blessings your cupcakes are making in the life of an orphan.  Join the Cupcake Kids and make your own cupcakes to raise awareness for the orphans imprisoned in Uganda. 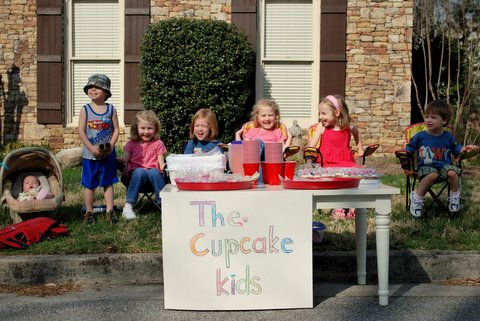 To register your sale, visit National Cupcake Kids. Their goal is to have a Cupcake Kids Sale in EVERY state in the nation!  All money raised goes to directly to Sixty Feet to help the orphans of Uganda.

“In the early spring of 2010, a little 6 year old girl and her 4 year old brother asked their parents how they could help the children of Uganda. They asked their parents if they could sell some cupcakes and lemonade on their street corner one Saturday afternoon and give all the money to SixtyFeet. And The Cupcake Kids were born.

The first Cupcake Kids sale was held at a home in Atlanta in March 2010. The moms and kids made some cute cupcakes and stirred some lemonade and that was about it. The parents told their children they would match all the money they raised and gladly give it all to SixtyFeet – thinking they’d raise about $50 or so.

Little did the parents know, the children would be selling cups of lemonade for $25 and cupcakes for $20!! That morning, the kids raised $260!  After that word spread very quickly and folks around the country were asking if they could help host a Cupcake Sale in their own neighborhoods. The next weekend there were sales all over Georgia and in several other states. An anonymous matching donor stepped up and we raised over $10,000 that weekend.

Since then, The Cupcake Kids have made many special appearances and each time they have been awed by the faithfulness of God! If your children have big hearts for Africa, we pray they’ll join our team.

Make your own Cupcakes and register today to help an orphan in Uganda!!

Here’s my favorite cupcake recipe to share- Are you planning on making cupcakes for National Cupcake Kids Sale on Saturday… leave me a comment [here] I want to know!

© 2023 Kari Gibson | On A Journey To Love Big. Curated by Charity Apps